On August 14, 2016, another Game Ninja regional competition will be held at the Festival and Congress Centre – Varna. 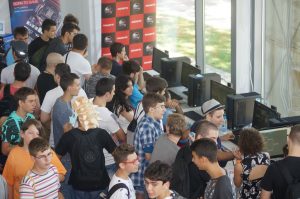 The first edition of the tournament in Varna will feature 1:1 Counter-Strike: Global Offensive, Dota 2, League of Legends and Hearthstone tournaments. Winners will receive plenty of prizes, provided by the event sponsors, including the main sponsor Razer and the companies such as Acer, HP, Fujitsu, Microsoft, Lancom and others.

Game Ninja is an annual gaming event that was named “Event of the Year” by the Bulgarian Game Awards 2016. In this Varna edition of Game Ninja, up to 64 entrants can participate in Counter-Strike: Global Offensive, League of Legends and Hearthstone tournaments, up to 32 players can sign up for the Dota 2 tournament. The ticket price is BGN 5 and tickets can be purchased on-site, on the day of the event.

In addition to a tournament focused on PC games, Game Ninja Varna will offer many more surprises to its visitors. There will be raffles with audience participation, as well as “free-to-play areas” with Overwatch, DOOM, DARK SOULS III, Rise of the Tomb Raider and The Witcher 3: Wild Hunt. Nakama Club will also provide the visitors with Pixel Art and stands with attractive products for gamers.

Game Ninja was started in 2013 by ICT Media and today is already the largest gaming event in Bulgaria, which takes place throughout the year and throughout the country. After achieving success in Sofia, Ruse and Burgas, Game Ninja is heading to Varna and is expecting to welcome over 500 visitors.

“On July 26, over 750 players competed live and participated in the Fan Fest Burgas, organized by Game Ninja and Nakama. On August 14, the fourth regional Game Ninja competition will be held in Varna, which will welcome all supporters of electronic sports from our maritime capital”, said Nelly Yolovska, Executive Director of ICT Media.

Part of the media coverage of the event:

Varnautre.bg: The Biggest Gaming Even Comes to Varna