Video calls in Teams grew 1,000% in March, as the company saw a new daily record of 2.7 bln meeting minutes in one day

Video calls and conferencing for educational needs have risen in recent weeks as employees work remotely and schools around the world are going online. That is what Microsoft’s first Work Trend Index report shows. The key findings are based on aggregated data from the Microsoft Graph.

People are adapting to the new ways of connecting and being productive when it comes to work and learn apart, according to the report. Microsoft saw a new daily record of 2.7 billion meeting minutes in one day. That’s an increase of 200% from 900 million in mid-March, showcasing the growth in demand for technology that both connects and fuels secure productivity. 183,000 tenants in 175 countries are using Teams for Education to allow educators to connect with their students via a virtual classroom experience.

Teams users are turning on their video two times more often than before the COVID-19 outbreak, which showcases the importance of eye contact and physical connections for people working and learning from afar, shows the report. Total video calls have grown by 1,000% in March, with Norway and the Netherlands turning on video the most – about 60% of meetings include video. 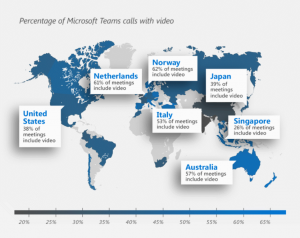 Countries and industries most impacted are turning to mobile to connect and people are now working more flexible hours as they juggle work and life. “Our data shows that a more flexible workday created by remote work is allowing people to work when it’s best for them,” Jared Spataro, Corporate Vice President for Microsoft 365, states in the report.

“Trends in the data and conversations with our customers show us the world is realizing we can effectively connect across distances in a way some never thought possible before,” Spataro says. COVID-19 is significantly changing the habits of work, and technology is helping people adapt to getting work done in meaningful ways, concludes the report.

You can find some of the coverage in the links below.

AmCham.bg: The Video Calls in Teams Grew by 1,000% in March, Says Microsoft

TechNews.bg: The Video Calls Have Grown by 1,000% in March