You are here: Home / News / Events / DevReach is Back with a Bang

DevReach 2017 gathered over 550 software developers from nearly 20 countries in Sofia. The Acta Verba team provided end-to-end event management and marketing services and was engaged to organize the premier developer conference in CEE.

Organized by Progress, the 9th edition of the conference took place on Nov. 13-14 in Sofia. The tickets were sold out a month and a half before that. The last edition was in 2013 and it was a challenging project to bring the event back.

With more than 30 hands-on sessions and packed halls, this year’s event featured world-class speakers discussing the latest technologies and approaches in web and mobile app development, artificial intelligence (AI) and machine learning. The conference ended with its traditional party for all attendees and speakers with the participation of the famous Bulgarian rock band, BTR.

“We’re very proud with the success of DevReach and its overall impact on the local developer community in the years,” said Todd Anglin, VP, Product, Progress.

DevReach 2017 is organized by Progress with the support of Milestone Systems, Accedia, SmartIT, Nemetschek Bulgaria, and Microsoft. Its first edition was in 2006 and since then it has become one of the leading developer conferences in Central and Eastern Europe.

Acta Verba also managed to engage media partners, including О’Reilly. 30+ unique articles dedicated to DevReach 2017 were published in leading IT media across Bulgaria. 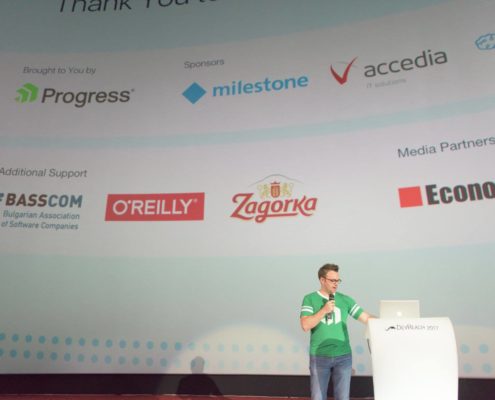 Software Group is Among the Fastest Growing Companies in the Deloitte Technology...
Scroll to top